This year couldn’t go fast enough for me – at least for the first 6 months – but lets start with a review of my last Christmas.

I stepped on a plane to Dar Es Salaam in Tanzania 5 days before Christmas to visit my friends Jude and Jon.

All I had to do was getting there, the rest was organised by Jude. Of course she had asked me what I wanted to see/do and so she booked a trip to the Serengeti and Ruaha. I didn’t know any further details, it was a surprise.

For Christmas we went 3 days to the Serengeti. The “camp” was luxurious and there were only a view guests. Every morning and afternoon we went out on Safari. Breakfast was somewhere in the bush – the chef packed every day 2 big Eskies with food.

At noon we had to return to the camp for lunch. We then enjoyed around 2 hours free time, mostly at the pool, before we headed out again.

On Christmas eve they cooked a huge buffet for a total of 5 people. There was a big turkey and lots of side dishes, salads and of course dessert. I think we didn’t even manage to eat 20% of the food.

As special attraction they had arranged a performance from locals. It ended with everybody dancing.

After only 2.5 days of safari I could already tick off the big five of Africa: Leopard, Elephant, Buffalo, Lion and Rhino. Of course I had also seen a huge amount of other animals. Jude and Jon are very much into birds and hence we were also stopping for them. I think I saw around 150 bird species!

Back in Dar Es Salaam Jon went to work and Jude and I went for one night to Zanzibar. Most of the time was spent walking the narrow streets in Stone Town.

Just before New Year we hopped again on a plane to Ruaha. We stayed in an almost brand new camp which was built into big boulders. It was stunning.

As before we went out every morning and afternoon on safari, but this time we also had 2 night safaris. For this we had to have a ranger with a rifle in the car. We searched with a big light and multiple spotlights for animals and saw quite a view nocturnal animals.

On New Years eve they had arranged a big dinner with all guests. Soon we were all tired and wanted to go to bed and hence we decided at 11pm to have a drink and then go to bed, since the wake up call for our next safari was at 5:40am

In case you want to see more of this amazing camp you can view photos here.

After 3 fantastic days it was time to fly back to Dar and it also meant for me to pack my suitcase. In the morning we wanted to go for a paddle on the ocean before I had to fly out in the afternoon.  Unfortunately this ended for me with a fall and an injured shoulder. 30 Minutes later I couldn’t even lift my arm anymore. The flight home was not very pleasant.

Back in Perth I went to the hospital. They only x-rayed and sent me back home, since nothing was broken. It was meant to be back to normal within 5-7 days. 4 weeks later I still had lots of problems so I decided to see another doctor. Further 2 weeks later I was told I needed surgery.

The surgery was another 3 weeks later and I was home for the following 6 weeks with a sling. No driving, daily exercises and lots and lots of heavy painkillers. Lucky I had a lot of good friends and my neighbours helping and looking after me.

Then it was back to work and lots of physio for the next 8 weeks. 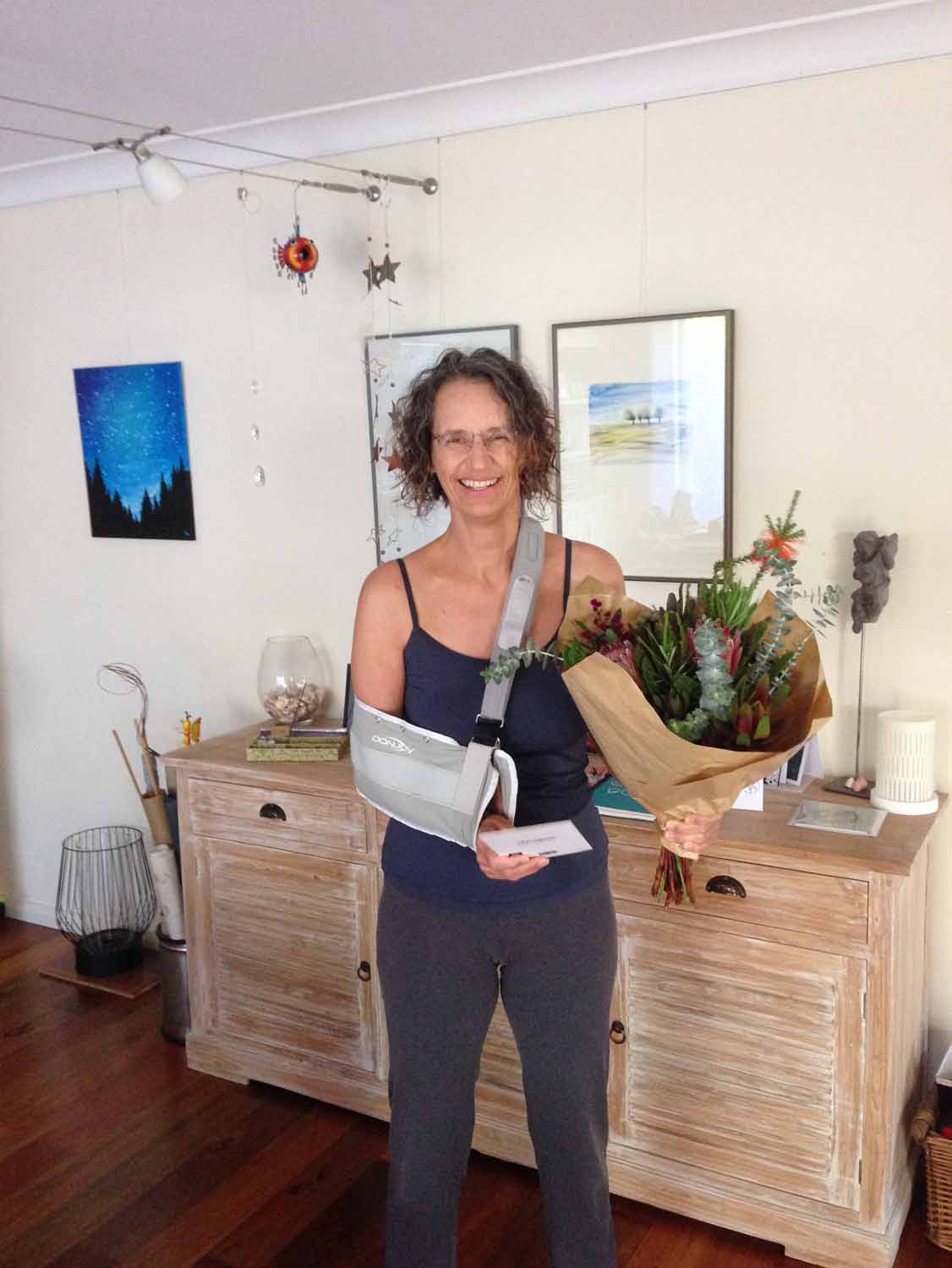 Very lucky I had already applied for my German holiday before Christmas and also had my flight booked and hence I could fly to Germany after only 8 weeks back at work. Since we had a big family reunion I didn’t want to miss it.

As always Mum was spoiling me with lots of yummy food. I did multiple trips with family and friends. The highlights were visits to “Biergarten”, a day in a spa, confirmation of my nephew Vitus, a trip on top of the highest mountain in Germany – Zugspitze, a medieval celebration called “Frunzberg Fest” and of course the weekend with over 40 relatives from almost all corners of Germany. It was great to be able to see everybody again. Before I knew, time was up and I had to fly back to Perth.

Back home the next phase of my recovery started: 3 times per week gym to rebuild muscles in my shoulder and arm. It was rather relaxed at the beginning since I hadn’t done anything for 6 months, but I got every month a new program and so it got more exhausting. I am glad the program is changing every month, otherwise it would be very boring. I am not a fan of the gym, but I can feel the improvements in my arm and shoulder. Lets see how long I stick with it.

Since my shoulder got better life returned almost to normal again with the ability to perform daily routine tasks.

I didn’t get to make many cards in the first part of the year and in August I already started with Christmas cards. I still really enjoy my hobby.

While I was home after my should surgery I got 2 quotes for the renewal of my pergola. However they were very expensive. When I spoke to a friend in August he said he would do it for me at a fraction of the costs. Before long he came and took everything apart and drove off with the wood. He refurbished all the wood and a couple of weeks later he set it all up again and finished it with polycarbonate sheet as roof. It looks really good. 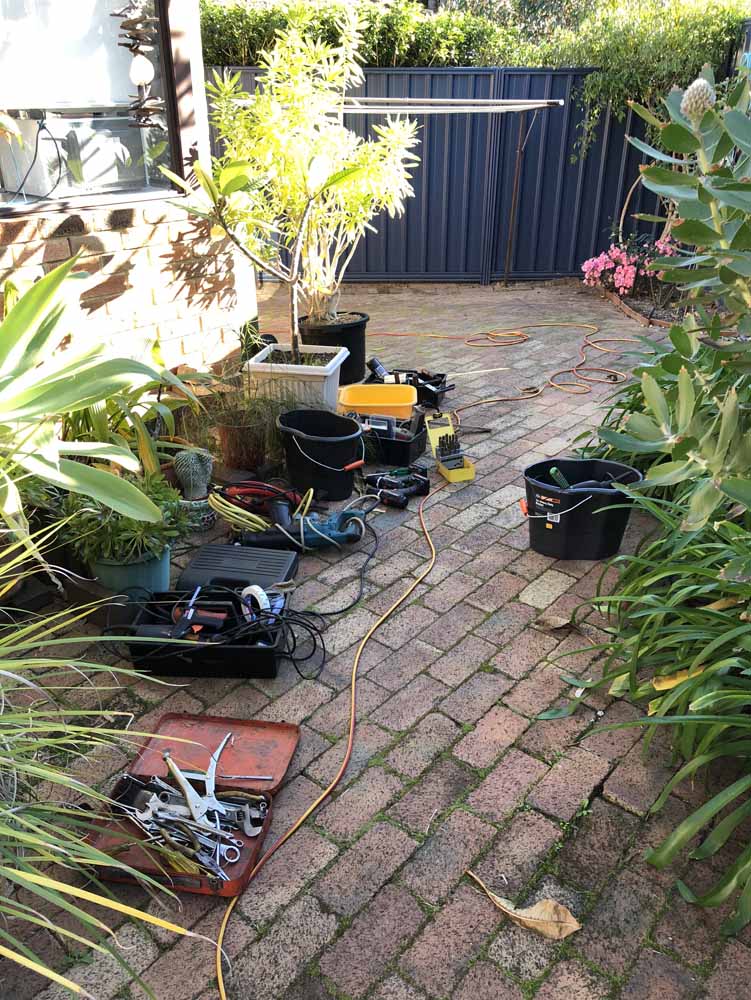 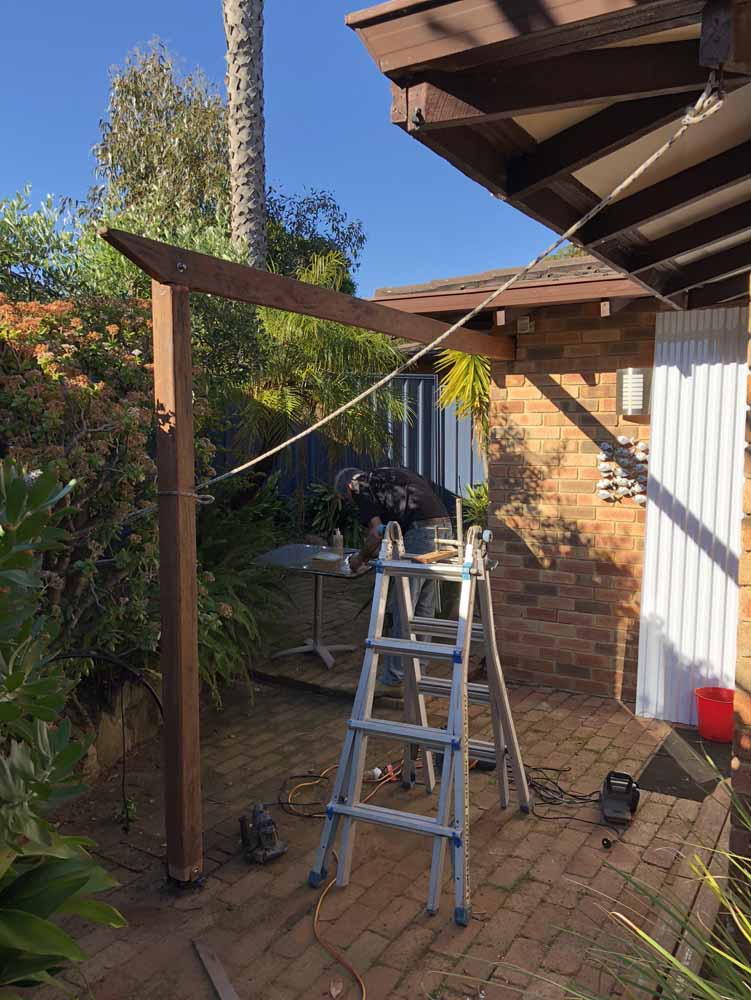 We had a new fence installed just before I left for Germany and this unfortunately resulted in my garden looking very sad, even a couple of months later. Hence I decided to bring my garden makeover project forward by a couple of years.

I got multiple quotes and after some negotiations I made my decision. 3 weeks later the company started. Originally the plan was to do some parts of the garden renewal, but one led to another and eventually the entire garden got a make over and the budget was blown! But it was worth it, it has turned out to be really great and I am very happy that it is all done. Otherwise I might would have started in a couple of years again.

This has resulted in hosting multiple garden parties either for coffee and cake or in the evening with snacks and drinks.

At the end of October I went on a little road trip with my friend Claudia to Wave Rock. We left early on a Saturday morning and drove through beautiful country side to Lake Grace. On the way we stopped for wildflowers and other attractions. We stayed there overnight. For dinner we went to the local sports club. They happened to have a halloween party and it looked like the entire town was there. Early the next morning we left to Wave Rock. We past a number of salt lakes and the scenery was just beautiful.

Once there we checked out the visitors centre and then headed over to Wave Rock. It was very impressive. After walking around on the bottom we found a walk way leading us up to the top. It was like a revelation to see, that it is actually a huge rock and the wave is just one end of it. We crossed the rock on the top and came down on a different spot. We then set out to find the Hippo Yawn, a rock formation. It was a beautiful walk through bush. From there we headed back to the car park as we were getting hungry and wanted to have lunch. We had some food in the visitors centre and then it was time to hit the road to get back to Perth. I think it was a good 4 hours drive back.

Almost all December I am having visitors. It keeps me very busy, but it is also nice as I can enjoy my new garden with them.

I managed to create an “Adventskranz” and displayed a bit of deco, but I still have to do the rest.

This year Christmas will be in Perth with my visitors from Germany. My work closes between Christmas and New Year and hence I will just enjoy some lazy days, doing things I love, like going to the beach, card making, catching up with friends and just relax.

Wishing you a very Merry Christmas and happy and healthy New Year 2019.