For the first time in years, I have been away over Christmas and New Year. I did a girls holiday with Deb, Nat and Tahereh down south.

We started off driving to Hamelin Bay on the 24th and celebrated Christmas at the Caravan Park. 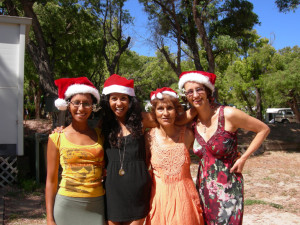 We all wore Santa hats when we opened our xmas presents during breakfast.

As we opened our presents one by one we were all pretty much “cooked” by the time we had finished and ready to jump in the turquoise ocean.

One of our constant activities was playing cards – Rummy was the favorite game. Another favorite was walking or running on the endless beautiful beach. Of course I had to collect shells. Mostly I found only bits and pieces of large turban shells, but I collected them anyway as they are perfect for creating shell mobiles.

We stayed three nights in Hamelin Bay. Our next stop was Stirling Ranges. The climb of Bluff Knoll was on the itinerary! 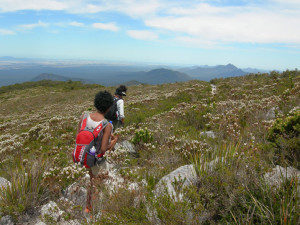 We started early morning at 8am and it took us around 2 hours to the top. After a nice break were we enjoyed the view we headed back down. On our way down we met lots of people walking up and it was nearly 12pm already! People are crazy trying to climb a mountain in the middle of the day when it is hot and hardly shade available on the way!

On the next day we already continued to Albany for a short visit and then drove on to Denmark.

Unfortunately the weather changed to overcast and rain on the next day and it got pretty cool for December, but we still had fun.

On New Years eve we went to a new place called the Healthy Buddha Bar. The atmosphere was great, but the food was a bit blunt. The best was the Egyptian Salad. Nevertheless we had fun.

Afterwards we went back to our Backpacker place and cheered the new year with the other backpackers.

On the 1st we had to drive already back home to Perth.